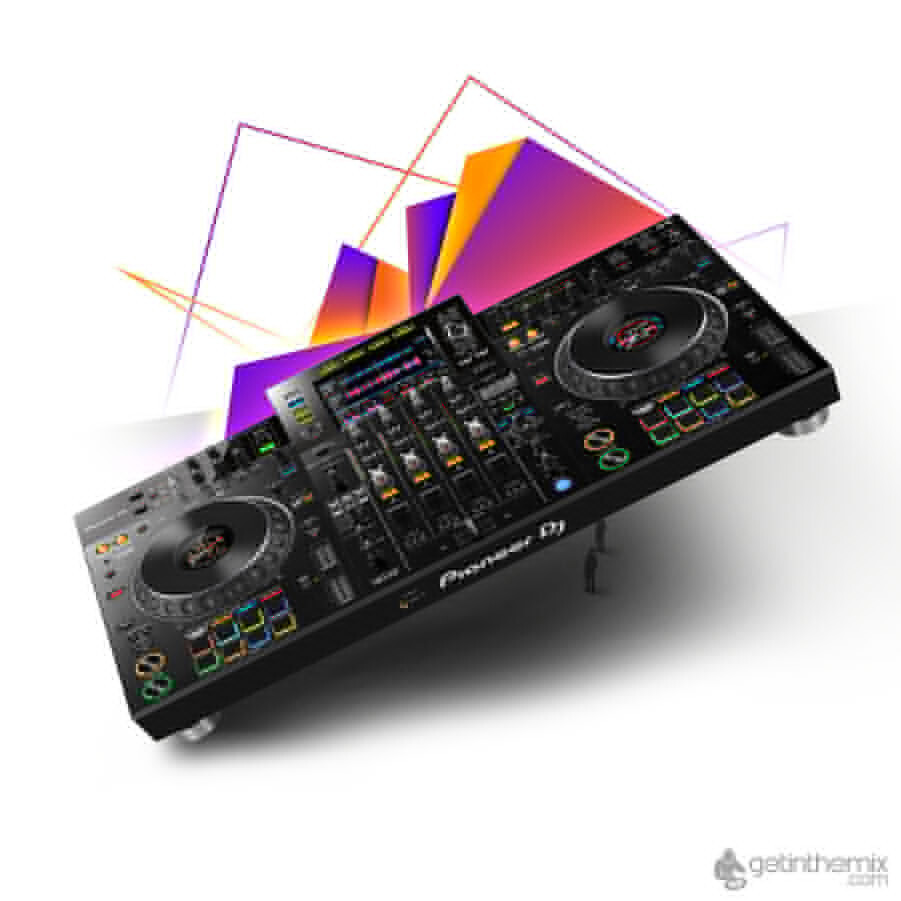 Some say it’s the love child of a DDJ-1000 & an XDJ-RX2, with the on jog displays and full colour effects and the like, others claim it’s the practical evolution of the Classic CDJ-2000 NXS2/DJM Nexus2 combo. Either way it’s been a long time coming and this item has been feverishly anticipated since the release of the Denon’s Prime 4.
So, Is it a worthy competitor? Well it depends what camp you’re in, if you believe this to be an DDJ-1000 / XDJ-RX2 combo then it ticks enough boxes to make it an evolution, while if you feel that this is an evolution of the NXS2 setup then it ticks a different set of boxes; let’s take a closer look.

A brief inspection of the Pioneer DJ XDJ-XZ reveals it to be the home of a plethora of ‘firsts’ for the Pioneer DJ controller range, actually it’s quite a feature fest!
First, we can move the elephant out of the room and let it be known that the XDJ-RZ is actually a two-channel standalone controller with four channels. Confusing? Well it is this aspect that has caused the XDJ-XZ to be described as a combination of the DDJ-1000 & an XDJ-RX2, instead of having 4 decks standalone, this unit runs as two decks standalone, and two as linked line/Phono inputs (CDJs/Turntables) or as DJ software inputs from a laptop.

The screen, where you manage all of this connectivity, is the same as the XDJ-RX2 and displays the waveforms of the two tracks in play as stacked waveforms. Pioneer have paid a lot of attention to the Microphone input stage of the XDJ-XZ with two Microphone inputs which, as well as the convenience of using combi jack connectors on each input, Pioneer has given each Mic input its own level adjust and 3 band EQ. As if this was not enough they’ve thrown in a built in feedback reducer, with multiple settings!  This is a lot of attention to detail on the microphone stage, which is quite uncommon on Pioneers Standalone controllers and makes the system a very appealing proposition for the mobile DJ buyer.

Another first is Pioneer DJ’s addition of a three band EQ on the Master output, which can be assigned, in the utilities menu, to also adjust the EQ on the Booth outputs.
Pioneer DJ for the first time have created their Standalone XDJ to be compatible with both Serato DJ & Rekordbox DJ which is a great way to experience both ecosystems and choose your favourite, without having to change your hardware setup. The XDJ-XZ features full size CDJ Jog wheels with customisable on jog displays, similar to the DDJ-1000.

The Mixer section of this unit is of great interest and the specification has been very generous. Pioneer DJ promotes it as their first standalone unit that has 4 channels. “The first 2 channels Channel 1 & 2 are standalone and Channels 3 & 4 are free to connect to an external piece of equipment and if you connect a CDJ or other PRO DJ Link gear you can use the inputs in the back.

The unit has taken many features from their Club Standard DJM900NXS2 mixer including all the Colour FX and the 14 Beat effects; this is as well as the previously mentioned new three-band EQ on the master channel, ideal for mobile DJs playing in less-than-ideal acoustic spaces.
The XDJ-XZ features a new Link Export feature, which allows you to link together different Pioneer DJ devices like, for example, the CDJ2000NXS2, XDJ-700 and the DJS-1000 you would then be able to browse tracks from the CDJs using the 7-inch touchscreen and sync them with your mix.

The ability to connect linked XDJ and CDJ units is an improvement; you could only connect to a computer’s Rekordbox library on the XDJ-RX2, not other Pioneer players
You can control all the XDJ-XZ 4 channels with a laptop Rekordbox or Serato, (Serato DJ Pro support is also coming in early 2020). The 7-inch touchscreen is the centrepiece, where your waveforms, cue points and track info are visible. The unit is in stock and available now at GetInTheMix.com

Akai Professional has just made a huge announcement and this one is a massive game changer. Introducing the MPC Key 61, the world's first standalone production keyboard. Essentially the love child of an MPC Live & a 61-key production midi keyboard this device takes standalone performance and production to the next level.

The MPC Key 61 features all the same professional quality plug-ins & instruments that are included with the MPC and then some, giving you the tools needed to create high-quality productions and to perform these live.

It’s the first MPC to include a 61 key semi-weighted keyboard with velocity and aftertouch, giving you the ability to instantly perform your tracks including the musical elements in a tactile way without the need for additional hardware.

Fathers day is coming up on Sunday the 19th of June, but it's always a nightmare trying to work out what on earth Dad wants. Well this year sort it hassle free with our DJ & studio gear gift ideas.

With up to 25% off everything from DVS to slipmats, mics to interfaces, keyboards to decks, make sure you don't miss out!

Pioneer DJ DJM-S5 Review: The battle mixer for all abilities?

Over the last 20 years, Pioneer DJ has become the industry standard in clubs around the world, and for good reason, their CDJ’s & mixers are solid, high-quality, reliable bits of gear that simply do not fail (very often). Despite this, they haven’t been able to crack the battle style mixer industry in quite the same way.

Pioneer DJ is hoping that this latest release will make a bit of a splash in the battle mixer scene and at first glance, it doesn't disappoint.