Pioneer DJ DJM-S5 Review: The battle mixer for all abilities?

Over the last 20 years, Pioneer DJ has become the industry standard in clubs around the world, and for good reason, their CDJ’s & mixers are solid, high-quality, reliable bits of gear that simply do not fail (very often). Despite this, they haven’t been able to crack the battle style mixer industry in quite the same way.

Adding the DJM-S5 to the range (It sits between the DJM-S3 & the DJM-S7) ensures there is an option for all different types of DJ at all price points, with this model being aimed at the “Hobbist” DJ as it’s good quality, works well but isn't super expensive.

Pioneer DJ is hoping that this latest product will make a bit of a splash in the battle mixer scene and at first glance, it doesn't disappoint. 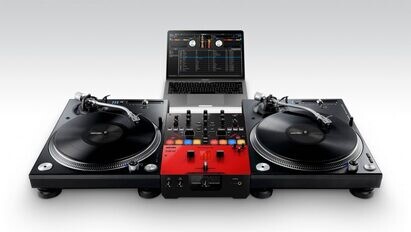 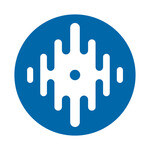 Let’s start with the software, it’s a 2 channel battle style mixer made primarily for Serato DJ Pro, it unlocks the full version of the software as a hardware unlock device. This means that you will not have to pay extra for any Serato licenses, simply plugging it into a computer with the program open will unlock the software, which means you are not limited to using just one or 2 machines as with a standard license. 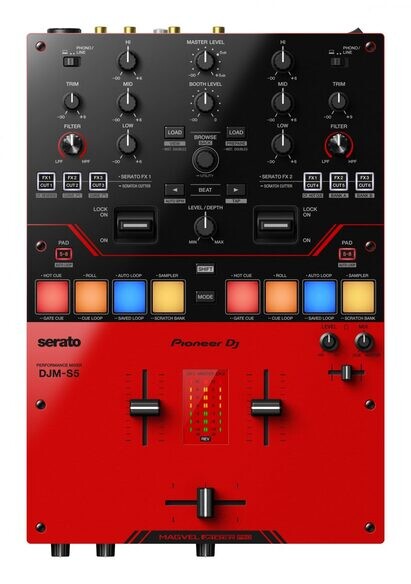 The DJM-S5 is the most aesthetically pleasing mixer I have seen in some time, with a black & red faceplate that really makes this mixer stand out from the crowd. It almost has a sith lord esc vibe to it, “the dark side is strong” with this mixer.

It feels like a throwback to a bygone era where not every mixer was black & we approve, big thumbs up from us, bring back the retro gear vibes!!  👍

The build quality on this one is pretty sturdy with a design similar to that on the other S mixers in the range, it’s got a plastic body and a metal faceplate. The knobs feel great with that soft touch feel that we have all come to love. The front of the mixer has a strange addition, a clear plastic panel gives you a view into the soul of the mixer or maybe more aptly a look at the adjust mechanism of the crossfader. Not a particularly useful feature but interesting nonetheless.

Once again Pioneer DJ has gone for the Magvel Pro fader, the same one found on the DJM-S7 & the DJM-S11 which we all know is a fantastic quality fader. You can adjust the tension by using the controls found by the little window whilst you can set the crossfader curve & turn on/of the crossfader reverse via the shift functions of the FX buttons.

The up faders seem to be standard Pioneer ones, similar to the likes found on the DJM-S7, they are smooth and durable however if you're the kind of DJ that likes to do cut’s on the up faders then you may have to consider an alternative.

In the middle section of the mixer, we find the 8 performance pads, alongside the: shift, mode & pad bank buttons.

The pads are click in ABR buttons rather than rubber touch pads however they are really reactive and feel good to use. There is only 4 on each side, but you can access pads 5-8 via the “5-8” button found above.

There is 12 built-in modes, with 4 selectable user modes. Each pad has a specific pad mode written above it and a second pad mode below it, holding “mode” and pressing the pad either once or twice allows you to switch between the two modes.

The full list of pad modes and how to enable them can be found in the handy chart below.

The mixer has a standalone hardware filter (Lo/Hi pass) that can be used to colour either analogue signals via the line inputs or software tracks when used with DVS or HID.

The beat FX controls in this example are not hardware but rather software controls for the Serato FX, however, as we know the Serato FX sound great and are really usable. Controlling the FX is really easy, they are selected via the 6 FX buttons (3 on each channel) and enabled via the now very familiar battle paddle which lock on if you flick them up and can be held down to act as a gate for the FX, only enabling it when it’s held.

Beat division buttons allow you to adjust the timing & the level/depth knob acts as a wet/dry for the FX in question. All of the FX work like inserts so you can use post fader and post CF tails.  Due to the way the FX are set up as actual inserts on the channel you can use the Serato FX on analogue inputs, so should you be playing actual vinyl as well as DVS you won't suddenly find yourself FXless which is a massive bonus.

This is a new feature to the S series and draws some inspiration from the DDJ-FLX6. It essentially functions as an auto cut as you move the record so that you can emulate scratch patterns without doing the cuts yourself. There are 6 different patterns to choose from and you affect the speed using the beat division buttons, below you can see the different scratch patterns available.

This mode is a useful learning tool to introduce you to the different kinds of patterns that you might want to recreate live, you can copy & practise them to add them to your own scratch arsenal. 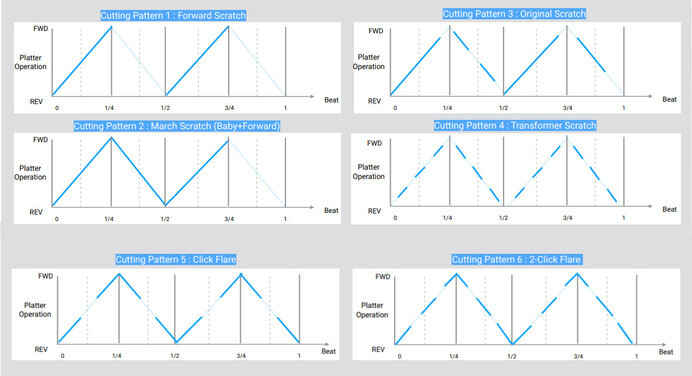 This is the second new feature to the S series, essentially each time you open then close the crossfader the track or scratch sample you are playing skips back to the nearest hot cue, in theory, this means that you don’t have to bring the platter back to the exact correct spot each time. Again this feature is a great learning tool and can be used to allow you to concentrate on the CF cuts and get those down in your muscle memory before you worry about the precision needed with the platter.

The CUE system on this mixer is much the same as in previous versions. Dual headphone inputs (¼” Jack & ⅛” Jack),  a level dial and a CUE/MASTER blend knob.

The top centre of the mixer features the master level and booth level knobs, below this we find the browse knobs. On either side, we have a 3 band eq and to the side of that (at the top) we have the USB/phono/line switch and the gain trims.

The S5 has a single pair of balanced XLR outputs for the master, RCA (unbalanced) for the booth output. Each channel has a switchable line/phono input via RCA, an extra AUX input (again via RCA) and an XLR-JACK combi input for the microphone. 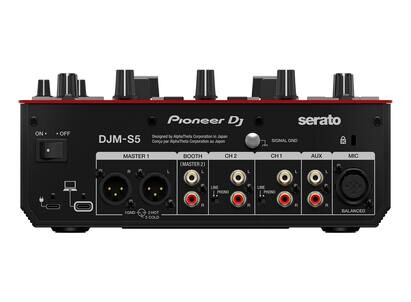 It’s worth noting that although somewhat limited on the control, the Mic does sound great and is sent straight to the USB so can be used for live streaming/broadcasting and with Serato's newish broadcasting feature you can easily send your audio to any other application on your laptop, for instance to OBS for a Livestream. 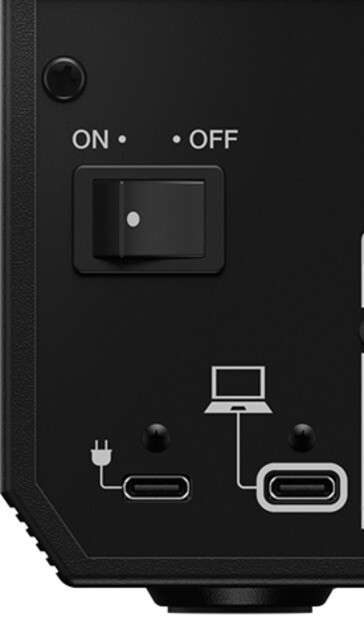 The S5 is bus powered via USB C which in itself is very interesting, whereas most mixers have a DC or IEC power input socket this one does not, it is instead fired up via dual USB C inputs. One is marked as power & one PC, however, you may only need to use one in most scenarios as the device is BUS powered via the laptop/USB. The power USB socket really only comes into play if you want to use the mixer standalone. This is a world first for a MID-PRO level standalone mixer as we usually only see this on controllers.

This means that you can really minimise the number of cables, and also adds an aspect of portability to the mixer should you have some portable turntables to use it with.

One minor drawback is that its output is a little less hot than its counterparts powered via IEC so you’ll need to crank that master slightly higher, however, this isn't an issue especially when you consider who/what this mixer is for.

The phono preamps sound pretty good for a mixer at this price point, although they aren't of the same quality as the more pro-level S7 & S11.

The frequency response of this mixer is 20 Hz-20 kHz so it covers the range of human hearing. Its signal to noise ratio is as follows:

With THD (total harmonic distortion) at:

This does mean that it's slightly lower in quality than the S7 & S11, however, coming in around £749 this is to be expected and in retrospect performs very well against the competition at similar price points.

Overall we are very impressed with this mixer, it ticks all the right boxes for a lot of scratch/battle style DJs at a very affordable price.  Although there are alternatives out there with finer control of some of the features this does a lot of what is needed without breaking the bank.

If you want to discuss this or other mixers in more detail then feel free to call our team of Pioneer DJ experts at GetintheMix, simply call us on  01206 845 125. 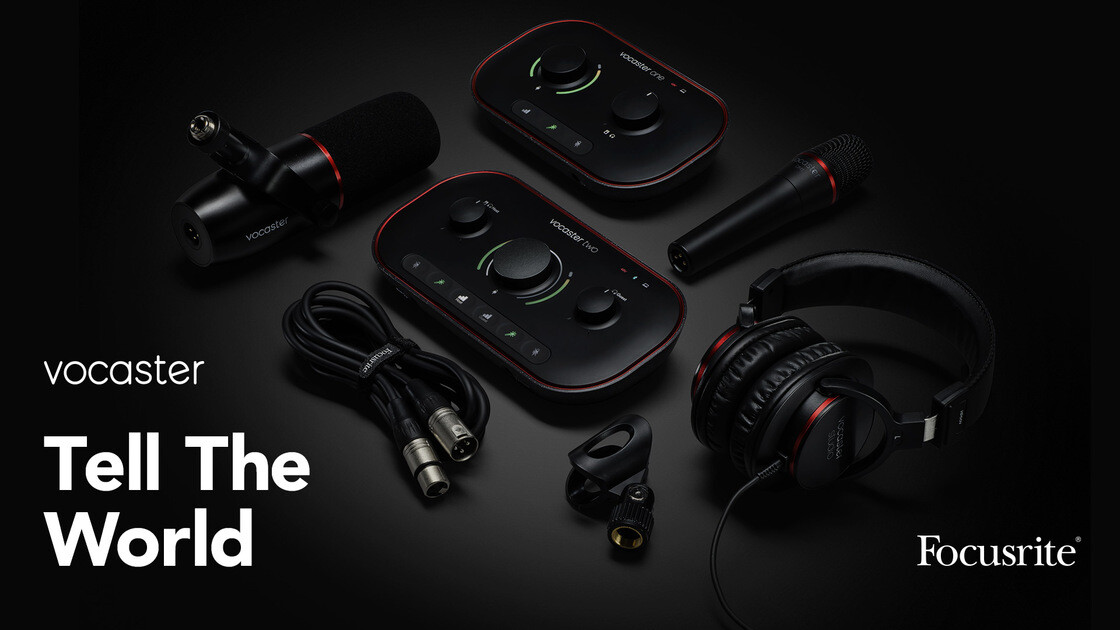 Focusrite have just announced their new range of podcasting interfaces - We give them an overview!! 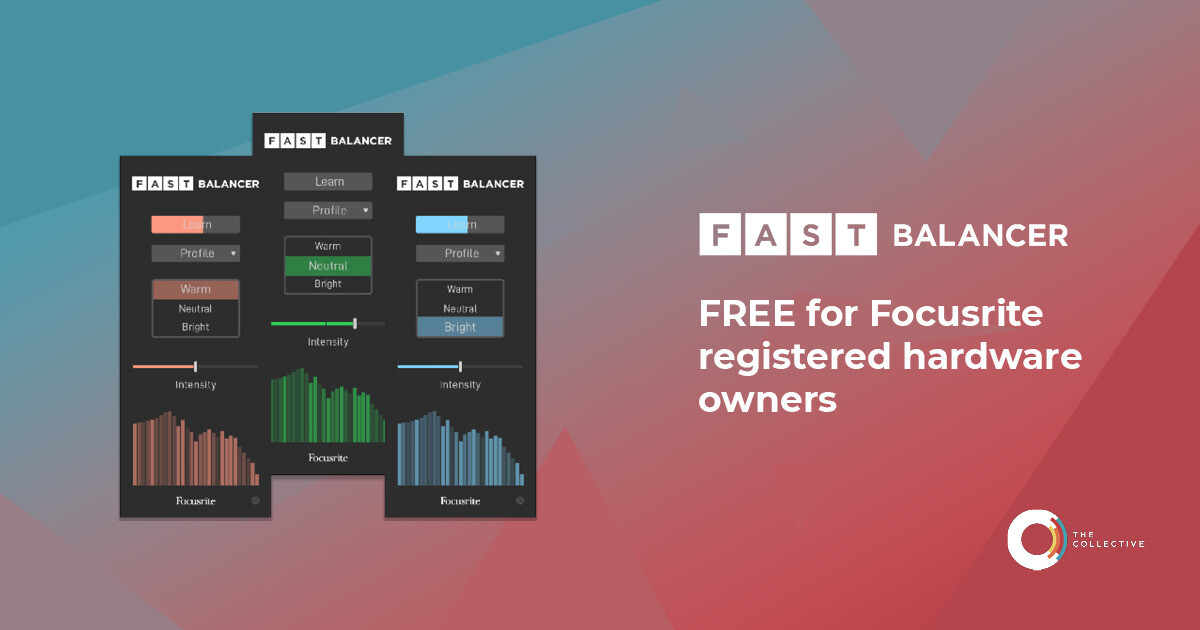 Focusrite have announced the latest plug-in from their collective. FAST Balancer merges AI with an EQ, But what does it actually do?