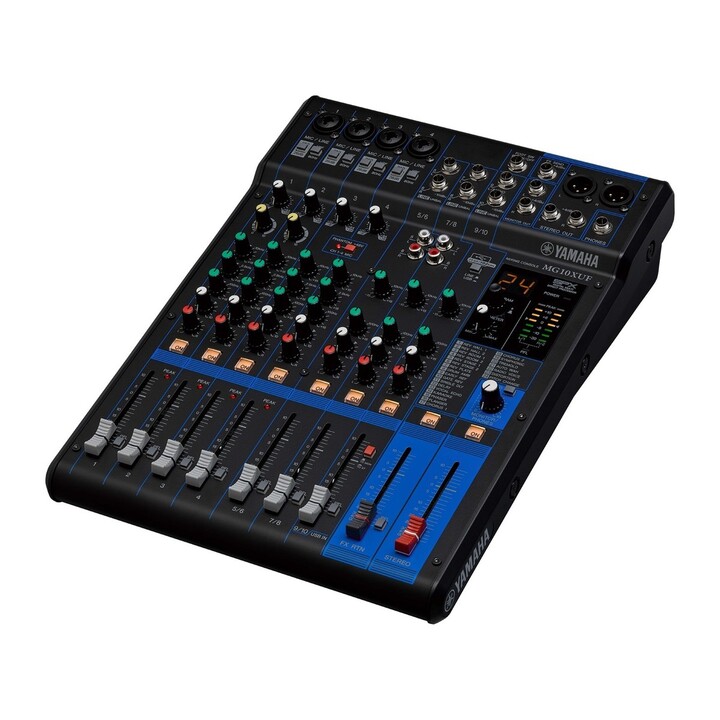 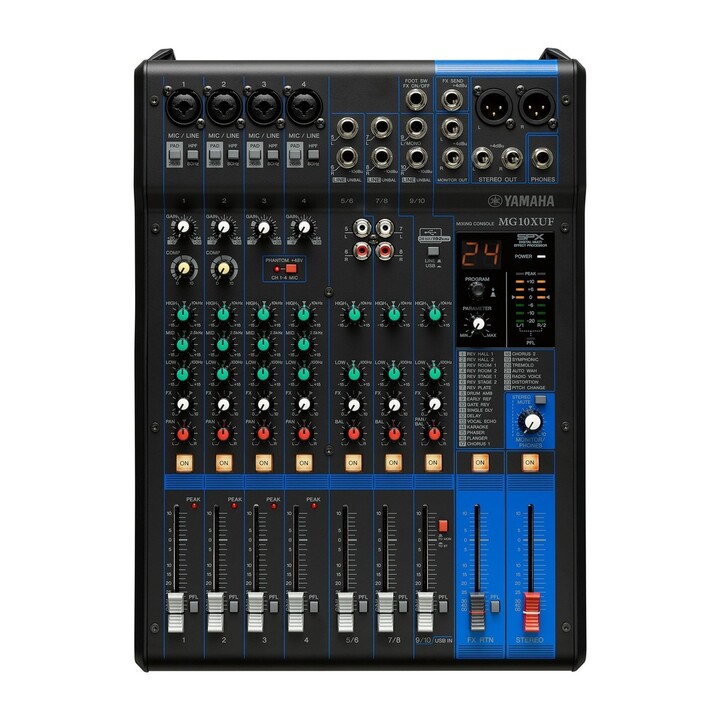 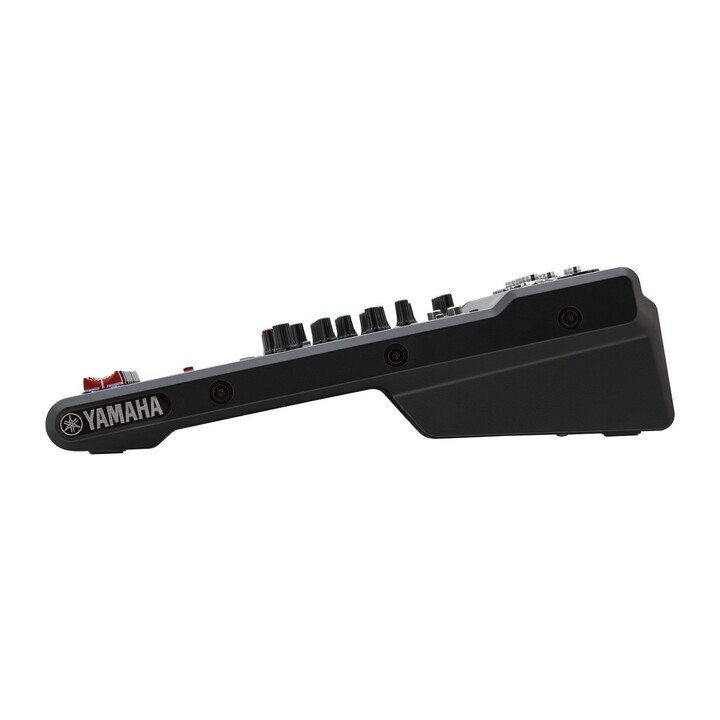 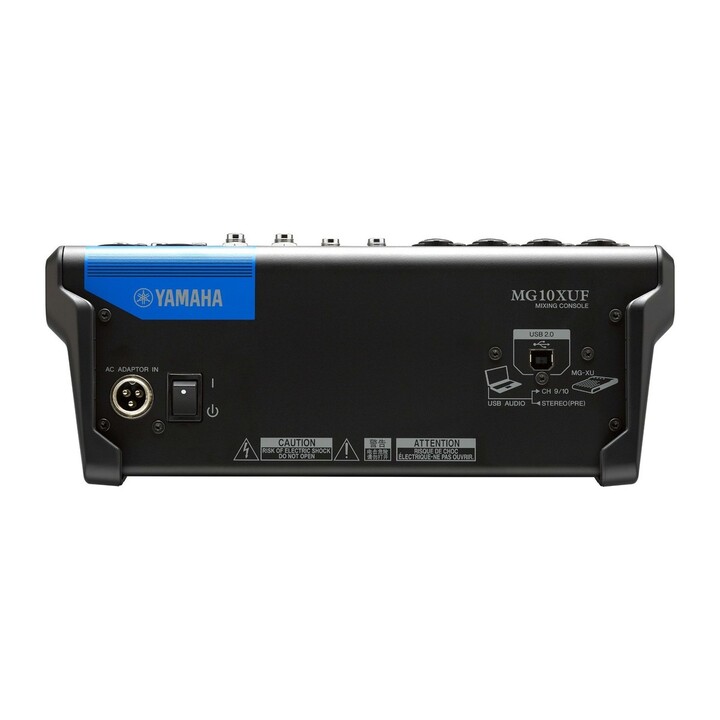 The Yamaha MG10XUF is a 10-channel mixer in Yamaha's excellent MG Series. Ideal for both live and studio applications, it is equipped with a whole host of high-quality features. The D-PRE class-A mic preamps provide an unadulterated sonic foundation for your mix, featuring an inverted Darlington circuit for high power but low impedance, and an incredibly wide frequency range. The result is natural-sounding bass frequencies and smooth highs with minimal distortion.

Also featured are 1-knob compressors which allow you to instantly access ideal compression settings, and 3-band equalisers on all mono channels for fine-tuning your sound with precision. Additionally, the MG10XUF is constructed with a sturdy metal chassis, making it extremely durable.

Yamaha has always strived to provide sound engineers with the purest possible signal instead of added processing or color to give it a "signature" sound, and the MG Series is no exception. Embracing this philosophy of transparent sound, these mixing consoles deliver a level of sonic purity and sound quality that is unmatched in their class.

D-PRE (Discrete Class-A Mic Preamps)
This is where it all starts. Everything you do as a sound engineer is dependent on the quality of your preamps, which determines the direction your mix will take, and ultimately how good it is going to sound. MG Series mixing consoles feature Yamaha's studio-grade discrete class-A D-PRE preamps, which utilize an inverted Darlington circuit comprising two cascading transistors in a configuration that provides more power with lower impedance. Delivering fat, natural sounding bass and smooth, soaring highs, with very low distortion, D-PRE preamps possess an impressively wide frequency range that allow them to handle signal from any audio source without overly amplifying any specific elements of the sound. Having such a pure sonic platform to build on will ultimately save you time and effort by eliminating the need for excessive EQing or additional effects processing in order to "fix" your mix.

High Quality Sound Op-amp
The head amp determines sound quality, and op-amp integrated circuits are one of the most important parts in the head amp circuit. MG Series mixers feature new, high-quality, custommade MG01 op-amps that we developed in cooperation with the semiconductor manufacturer. Although many other Op-amps prioritize electrical design and efficiency, we worked directly with the semiconductor manufacturer to focus on sound quality first. MG01 op-amps feature redesigned circuitry in which even the internal components and wiring have been optimized, and use materials such as high-quality silicon wafers and copper wire to achieve superb resolution.

Our Mixer. Your Sound
When was the last time you heard guitar without EQ or a completely unprocessed vocal on one of your favorite songs? Probably never. Yamaha mixers are famous for their flat response and sonic purity, but it often takes more than a perfectly-captured instrumental performance or vocal to achieve a professional-sounding mix. Equipped with some of the same state-of-the-art functionality featured on Yamahas high-end consoles, the MG Series gives you the tools you need to produce high quality sound that is uniquely your own.

1-Knob Compressors
Compression plays an essential role in just about any recording or sound reinforcement environment by altering the level of dynamics of an audio signal when you need livelier guitars, punchier bass lines, a tighter snare, or a cleaner vocal sound. However, it can take countless hours to master the complexities of even the most basic outboard compression units and use them effectively. Originally a Yamaha innovation, 1-knob compressors are now an industry standard that gives you instant access to optimized compression settings via a single rotary control. (except for MG06 / 06X)

EQ and High-pass Filters
There's nothing more useful than reliable equalization when you need nuanced management of your tone. The MG Series benefits from Yamaha's unparalleled experience in designing pro audio gear, featuring 3-band equalizers on all mono channels for precise control of your sound. High-pass filter allows you to eliminate unwanted low-frequency noise, for a smoother, cleaner mix.

AUX / Effect Sends / Group
MG Series mixers feature up to AUX sends for expanding your sound reinforcement or recording setup, allowing you to incorporate additional effects, output to external recording devices, or feed to an monitoring system. (except for MG06 / 06X) Master send controls are also provided. The MG06 / 06X, MG10 / 10XU / 10XUF and MG12XUK have a single stereo bus. All other models additionally feature one or two stereo group buses and outputs that can be used for convenient channel grouping. Assign switches for the stereo and group buses are located next to each channel fader.

The function of another two stereo channel vary depending on model: With MG20 / 20XU, XLR accepts MIC level signal and two RCA connectors accepts LINE level signals and can be used either mono or stereo. With MG12 / 12XU and MG16 / 16XU, two phone connectors accept LINE level signals as stereo. Additionally, each of the stereo channel features 2TR in (RCA connectors) and can be used as independent input from external audio sources such as CDs. MG10 / 10XU / 10XUF and MG12XUK are equipped with additional stereo channel with a pair of phone jack that accepts LINE levels.
With XU models, any incoming source that are sent via USB can be assigned to one of the stereo channel. In addition to the main stereo outputs (XLR L/R, TRS phone L/R), MG Series mixing consoles are equipped with a comprehensive suite of output connectors, including GROUP OUT (TRS phone), AUX/FX OUT (TRS phone), MONITOR OUT (TRS phone L/R), and HEADPHONE OUT (stereo phone) connectors, allowing master outputs to be chosen to suit specific applications such as monitoring or mastering.

Built-in SPX Digital Effects
For musical and non-musical applications alike, effects processing adds polish and professionalism to the mix. The MG X / XU models features Yamahas acclaimed SPX digital multi-effect processor, offering a comprehensive suite of 24 editable digital effects perfect for enhancing your mix, whether adding depth to a speaking engagement or breathing new color and atmosphere into a live band performance. In particular, the high-quality reverb and delay expand the spatial quality of the sound with remarkable realism and naturalness. You can even connect an optional FC5 foot switch for effect on / off control. (MG10XU / 10XUF / 12XU / 12XUK / 16XU / 20XU)

Built to Last
For gigging, recording, and installed applications alike, your console can be subjected to a wide range of environmental conditions and hazards. Excessive humidity, unstable power supplies, and the rigors of road travel in general can take a serious toll on a mixing console, often causing expensive, time-consuming repairs, and reducing its lifespan. The MG Series has been redesigned with an emphasis on durability, incorporating practical features that offer greater flexibility while ensuring peak performance for many years to come.

Metal Chassis
Built to last, MG Series mixers feature a rugged, impact-resistant, powder-coated metal chassis, offering an unrivalled level of durability. With a sleek design contoured for optimal convection cooling, the internal layout separates the power supply from the analog circuitry for superior noise reduction, and further extends the life of the components inside. To further ensure reliable performance, knob control placement above the surface of the chassis diverts any impact or pressure on the knobs to the chassis itself and not the circuit board or components underneath.

Rack Mount Kit Included
Easily adaptable to a diverse range of installed and portable applications, the 16- and 20- channel models of the MG Series included rack ears, giving you the option of a rack-mounted or desk-top configuration. Extremely durable, their sleek design makes safe, stable placement of your console hassle-free, keeping setup time and effort to a minimum. (MG16 / 20 / 16XU / 20XU)

XLR connector
The main stereo outputs feature XLR type connectors that lock to prevent accidental disconnection. Rugged and dependable, these professional connectors ensure providing stable signal transmission even in the most demanding environments.Create, Record, Listen
The MG XU models feature the same digital connectivity that is used to streamline the recording process on Yamahas professional-level mixing consoles. Take advantage of state-of-the-art digital technology that makes it easier than ever to plug-in, play, record, and then listen to your creations.

Rec & Play
The MG Rec & Play software application enables high-quality recording, as well as fast and easy playback of songs and sound effects, by simply connecting your iPhone/iPad to any MG Series XU model. This intuitive application can be used for a wide range of purposes such as recording songwriting sessions, band rehearsals, and live gigs, or providing background music or sound effects for live concert or entertainment events, or parties. (MG10XU / 10XUF / 12XU / 12XUK / 16XU / 20XU)

Cubasis LE
Cubasis LE is available in the App Store. You just need to connect your iPad to MG XU models to make it work. Cubasis LE is the compact version of Steinbergs streamlined, multitouch sequencer for the iPad, providing the same look and feel of its bigger brother Cubasis. Specially designed for quick and easy operation, Cubasis LE makes recording, editing and mixing a breeze. Cubasis LE places touch-intuitive production tools in your hands, opening a new world of possibilities for your creativity. (MG10XU / 10XUF / 12XU / 12XUK / 16XU / 20XU)

I was quite unsure if this mixer would do a good job as an audio interface, and it is amazing. 2 in 1.. mixer and audio interface... It took a lot of stress from my CPU on my Macbook Pro. Love it. Plus I bought a pair of KRK8 I they make the perfect match.

Very pleased with the unit and with the service provided by get in the mix.. thank you