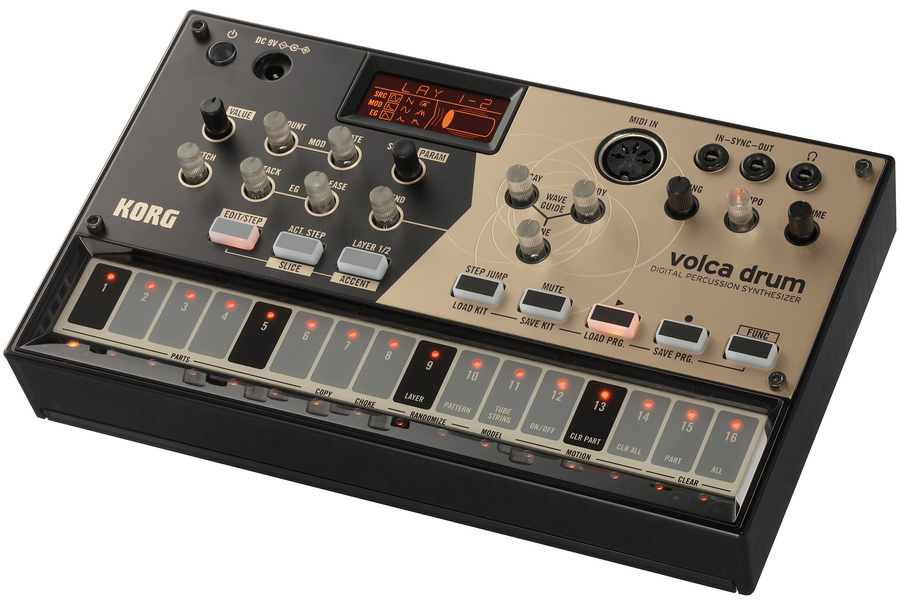 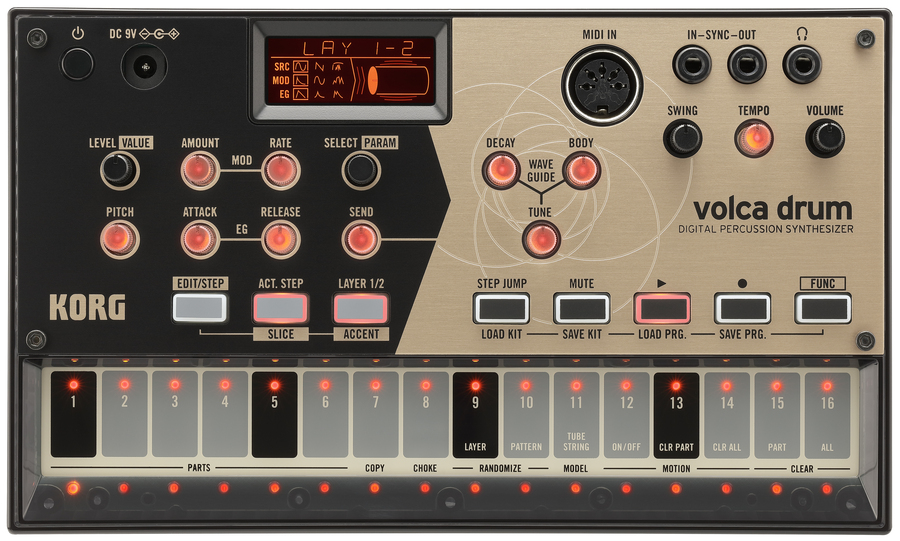 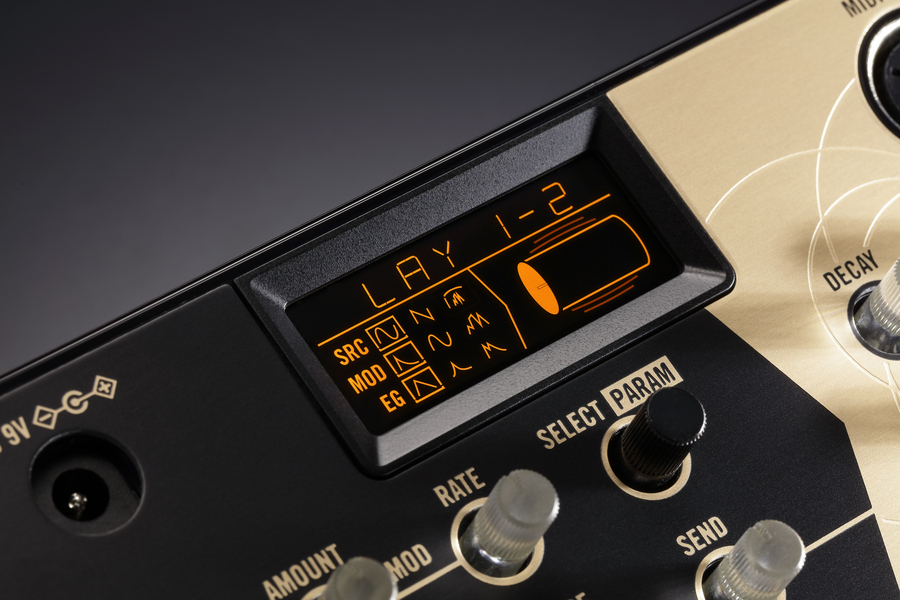 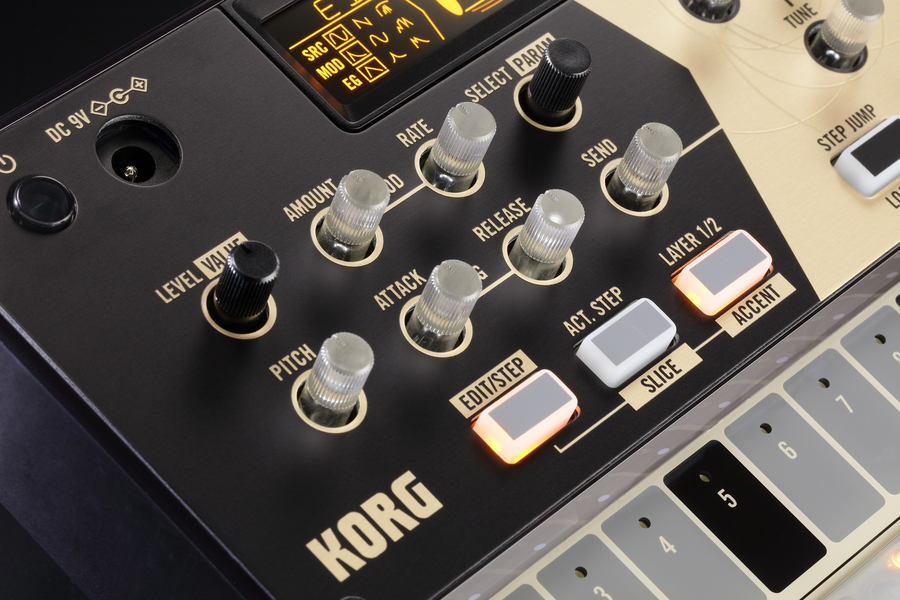 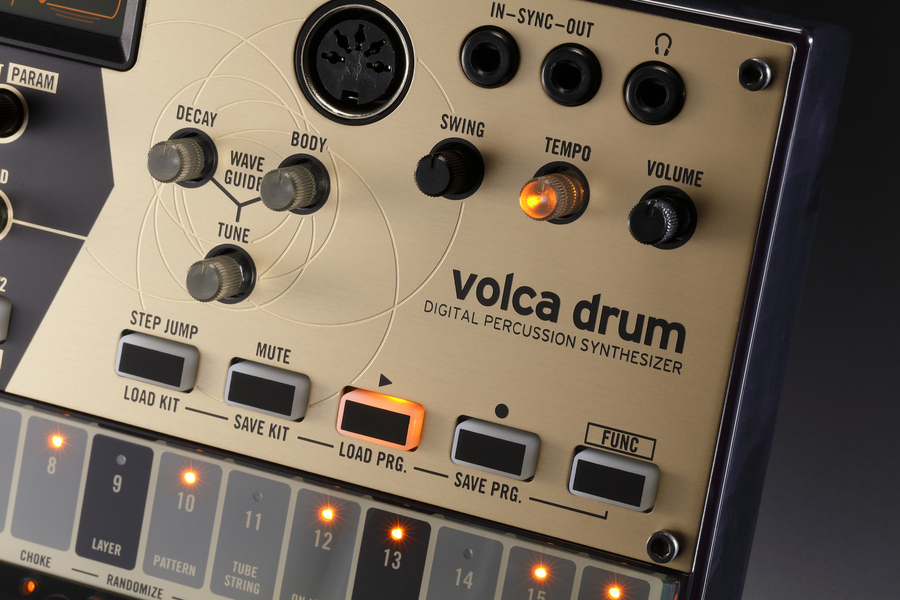 This is the Korg Volca Drum; the latest in Korg's innovative Volca series. As with all of Korg's Volca series products the Drum has been designed to let ideas flow and shape your music as you create it. The ACTIVE STEP function for example lets you skip steps during sequence playback, or jump to the step of the button that you press during playback to completely mix up your sequence. Or to go completely rogue you could try the Drum's randomiser function that will randomly select a sound and let you put sequences together that you might never have thought of. All of this creativity is packaged into the Korg Voca Drum's tiny frame which is also battery-powered and has a built-in speaker, making it the last word in fun, portable, digital music making.

Joining Volca Kick and Beats as the Third, and Most Unique, Drum Synth in the Volca Lineup
The volca series is all about unique sound. Whether it's analog, PCM, or FM, the volca series puts unique sounds into an accessible platform. And now, the series is joined by a new rhythm machine that brings yet another sonic character. It's the volca drum digital percussion synthesiser.

Based on a simple trigger waveform, wave folder and overdrive are used to add overtones and distortion, and then a waveguide resonator effect brings the sound to life. The six-part DSP synth engine was designed with a completely different philosophy than conventional drum machines, and generates a wide range of unexpectedly different sounds. And of course, you can play those sounds from the volca-style sequencer.

Adding these distinctive sounds to your rhythms will revolutionarily transform your performances and productions.

Digital Percussion Synth with a 6-Part x 2-Layer Structure
The term "digital" typically brings to mind sounds that are based on PCM-sampled bass drum, snare drum, or cymbal, but the volca drum creates its drum sounds by DSP-powered analog modelling. Oscillator waveforms such as sine wave, sawtooth wave, and noise are provided. By applying various changes to these waveforms, you can create a wide variety of percussion sounds that range from realistic to idiosyncratic, and are not limited only to drums.

The six parts each have two layers, and do not impose any rules or restrictions such as specifying which parts must be used for the bass drum or for the cymbal; all parts have the same specifications. You can freely assign your new sounds to these six parts without being limited by the conventions of a drum set. A kit consists of the six parts that you've assigned plus the waveguide resonator effect settings, and 16 such kits can be stored in memory (the factory settings contain 10 preload kits).

Distinctive Sound from a Newly Developed DSP Engine
Each part consists of two layers. For each layer, users choose one of five types of oscillator waveform including sine wave, sawtooth wave, and HPF noise, and also choose from three types of pitch modulator and amp EG, each optimised for drum sounds. Layer parameters can be edited either individually or simultaneously, and users can also use the two layers to produce the same sound for additional thickness.

You can customize the resulting trigger waveform by applying bit reduction to produce roughness, adjusting the wave folder depth to add complex overtones, and using overdrive to adjust the distortion. In this way, you can generate distinctive sounds from this sound engine that's structured rather differently from a typical drum machine.

Once you've specified the sound, you can adjust the balance of the parts by modifying the timing at which steps are heard, the pan, the gain before mixing, and the effect sends.

Waveguide Resonator Adds Rich Resonances
The effect section features a waveguide resonator that's based on physical modeling, and which adds sympathetic resonances to the sound. You can choose from two types of waveguide: "tube" which adds the resonance of a cylindrical object such as a drum body or a long pipe, or "strings" which adds the metallic resonance of a string. The three knobs located in the center of the panel let you specify the DECAY (amount of attenuation), BODY (sonic character), and TUNE (pitch). Setting TUNE to a lower value will produce a delay-like behaviour. You can take advantage of these knobs not only for sound design but also in your live performances.

16-Step Sequencer with a Wide Range of Parameter Automation
The 16-step sequencer is excellent for improvisation. You can easily create patterns using the 16 buttons, each corresponding to one of the 16 steps. In addition to step recording, the sequencer also supports realtime recording in which you can construct a pattern while looping the playback. The pattern chain function lets you play multiple sequence patterns successively, so you can successively play back desired patterns of consecutive numbers. Up to 16 sequences can be connected to construct patterns with 256 steps.

In addition to simply playing a drum pattern, you can use the motion sequence function to memorise knob operations during realtime recording and reproduce them during playback; a total of 69 different parameters can be memorised. This is useful not only when you're creating your patterns, but can also contribute to live performances that overflow with originality. Up to 16 sequence programs (16-step sequencer patterns, stored motion sequences, kit number) can be saved in internal memory.

ACTIVE STEP Lets You Replace Steps for Each Part
There's an active step function that lets you skip steps during sequence playback. This can be used to create "short loop" effects and irregular rhythms, or you can even create polyrhythms by using different settings for each part. Also provided is a step jump function, which jumps to the step of the button that you press during sequence playback. By using these functions to edit in real time, you can create dynamic performances that arise from chance.

Slice Function Finely Divides a Step to Allow Drum-Rolls
The step slice function lets you play drum rolls. You can use a knob to change the number of slices, and insert a detailed drum roll in the middle or at the end of a pattern to create a climax for your song or performance.

An accent function that can be specified in 16 levels.
You can set accents to create strong beats at specific steps, not simply as an on/off setting but in a range of 16 levels, allowing you to express a subtle sense of groove and rhythmic nuance.

A Convenient Choke Function Lets You Specify Grouping for Parts
There's a choke function that lets you specify which of multiple parts should take priority when sounded simultaneously, such as the hi-hat closed and open sounds of a drum machine. Parts for which you've enabled the choke function will not sound simultaneously; only the one part of the lowest part number will be heard.

Two Randomize Functions Expand Your Inspiration
The volca drum provides two randomize functions that let you randomly change the sound (layer) of the selected single part, or to randomly vary the step, slice, accent, and active step settings of the selected single part. By using the randomize functions during a performance, you can add unexpected change and development to the sound and the pattern.

Novel Design Featuring a Custom LCD
The aluminium panel is created using an etching process that emanates a sense of quality, using delicate relief to express the text and fine lines rather than using printing. In a first for the volca series, a custom LCD is used. The high-brightness display provides excellent visibility, portraying complex settings graphically for comprehension at a glance, and ensuring that volca drum is easy to use with a quick learning curve.

Synchronized Performance With Other Volca and Electribe Units, and With your DAW
Since this unit provides a sync jack for easy connection to Korg groove machines, you can connect it to another volca series unit or to equipment such as an electribe or the SQ-1, and enjoy synchronized playback with the sequencer. There's also a standard MIDI IN connector, so you can use the volca drum as a sound module for your DAW.

Enjoy Anywhere
Compact, size, battery operation, and built-in speaker mean that you can take this unit anywhere and enjoy playing on the go.

This is not a typical drum machine... because you can create a wide range of sounding parts from solid drum sounds to really FM type synthesiser sounds. Plus sending your parts through the wave guide to give even more layers. It's fairly quick to learn and the layout is great. Check out Cuckoo's mega tutorial video!