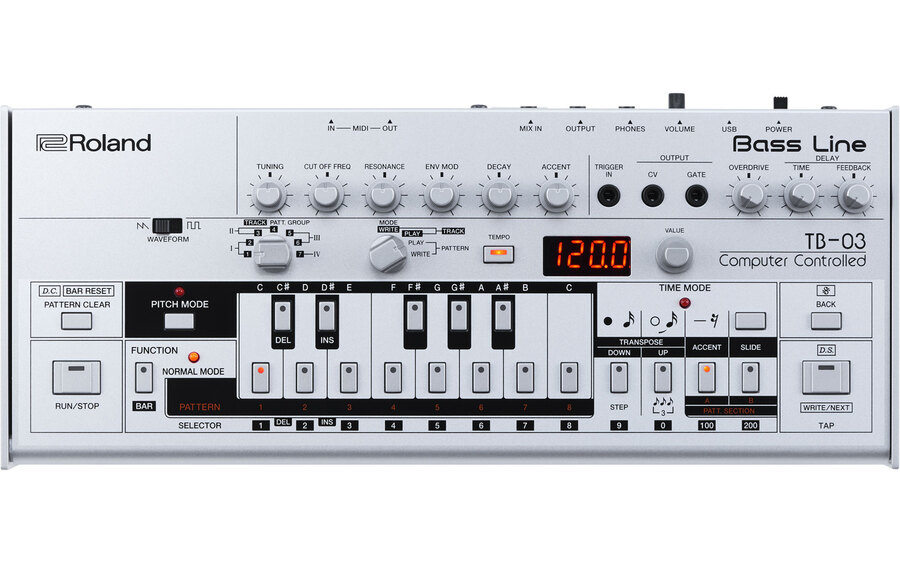 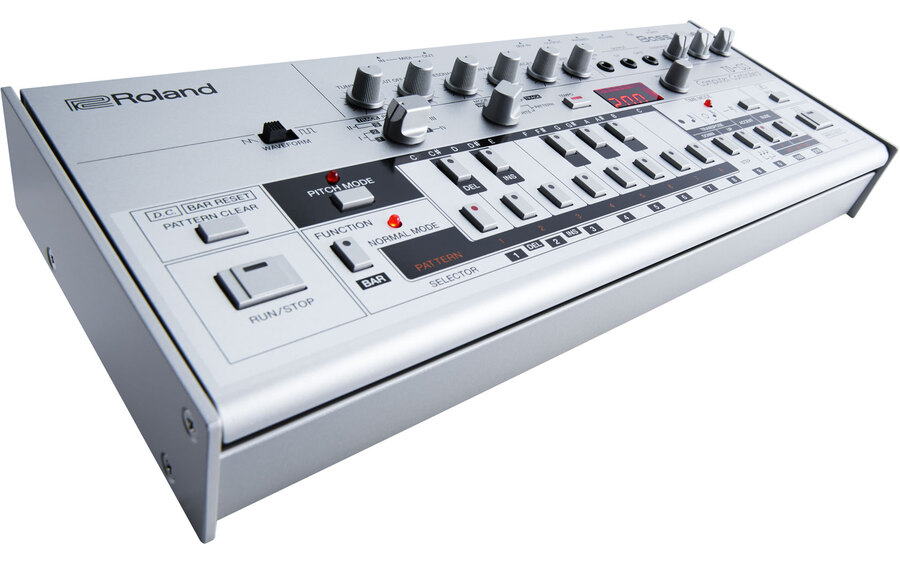 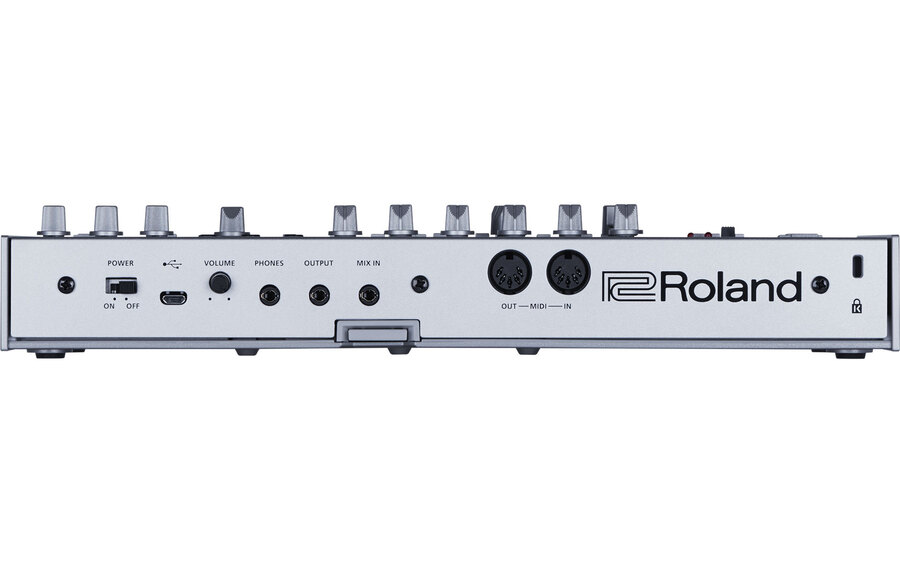 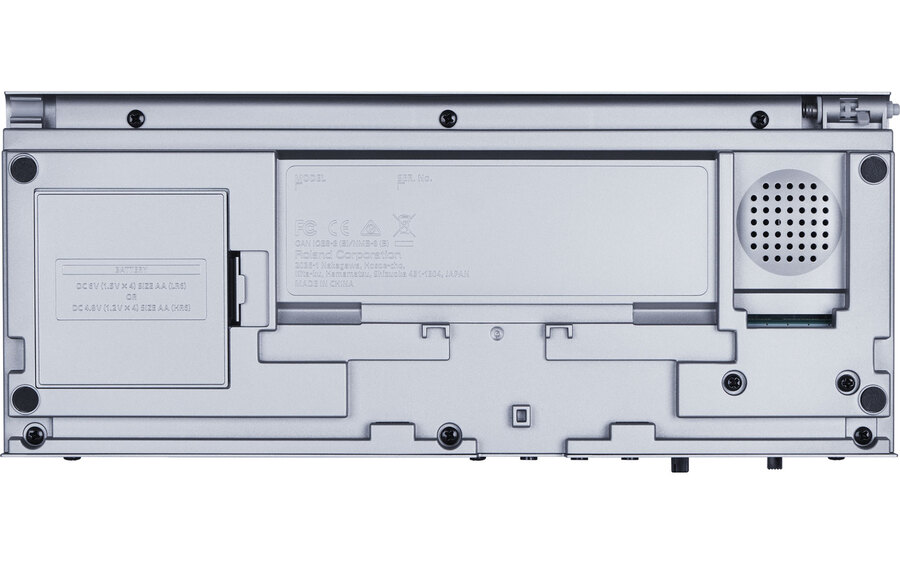 The Roland TB-03 is an authentic recreation of the TB-303 Bass Synthesizer but a smaller, portable version. It retains the same sound and user interface as the original but also has some new features, including four-digit LED display, overdrive and delay effects, MIDI, fine tempo control and additional functions for pattern creation.

The Classic TB-303 Sound in the Palm of Your Hand

The battery-powered TB-03 is a direct descendant of the famous TB-303 Bass Line Synth. The layout and controls are unchanged, so it works just like the original. It sounds like it too, thanks to Roland's advanced ACB technology that recreates the hypnotic liquid grooves of the magic silver box. But the new TB-03 goes even further, with several enhancements not found on the original model. The four-digit LED display makes programming easier and more accurate, while overdrive and delay effects let you unleash a twisted, tribal wall of sound to send the crowd into a frenzy. Back in the studio, the TB-03 can send control information via MIDI or its USB port, the latter of which also functions as a 24-bit/96 kHz audio interface.

You know when you hear a TB-303-a hypnotic, tribal sound that works best in dark, crowded rooms with big sound systems. Using the same ACB (Analog Circuit Behavior) technology from the acclaimed AIRA series, the TB-03 accurately emulates the expressive, slippery sound of its older brother, and even adds a few surprises. Saw and square waveforms are available, along with all of the rotary control knobs that help shape the 303's unique character, including tuning, cutoff, resonance, envelop mod, decay, and accent.

New Features Not Found in the Original

The TB-03 includes several enhancements over the original TB-303. Firstly, the four-digit LED display makes programming easier and more detailed, since you now have a visual representation of the value being edited. Then there are a variety of overdrive, delay, and reverb effects that dramatically change the mood and tone of the TB-03, going from smooth to spiky to squealing. Programming patterns is also easier thanks to newly added functions that include step write, shuffle, and fine tempo control. Finally, the inclusion of MIDI and USB ports mean that the TB-03 can send and receive control information and connect easily to computer-based DAWs.

If you're familiar with the TB-303's programming method, then you'll feel right at home with the TB-03. The original Pitch and Time write modes are included, along with an all-new Step mode. Pattern programming is also enhanced by the LED display, which shows the current step in the sequence as well as showing fine tempo values (such as 125.5 BPM). The internal sequencer can be triggered externally via the trigger input, and you can even switch between write and play modes without stopping pattern playback, opening up new possibilities for live performance.

The TB-03 includes MIDI IN/OUT ports and USB, allowing control information to be exchanged with other instruments and devices. This turns the TB-03 into a versatile controller, especially as you can use the CV/Gate output to control external analog gear and modular synthesizers. This level of control works both ways, thanks to the trigger input that lets external gear drive the TB-03's internal sequencer. Once connected to a PC or Mac, both audio and MIDI data can be sent through the USB port.

Some of the best music is made away from the studio, so the Roland Boutique series runs on 4 x AA batteries, ready for when inspiration strikes. Alternatively, the TB-03 can run on USB bus power.

USB Audio Interface for Direct Recording to Your DAW.

Via its USB port, the TB-03 functions as a high-quality 24-bit/96 kHz audio interface, providing a simple and reliable way of recording directly to your DAW application. You can keep your favorite settings and sequencer patterns safe too via the USB data backup function.

This is a great bit of kit! The sound is so much better than any plugin. Great build quality.

This is a great bit of kit! The sound is so much better than any plugin. Great build quality.