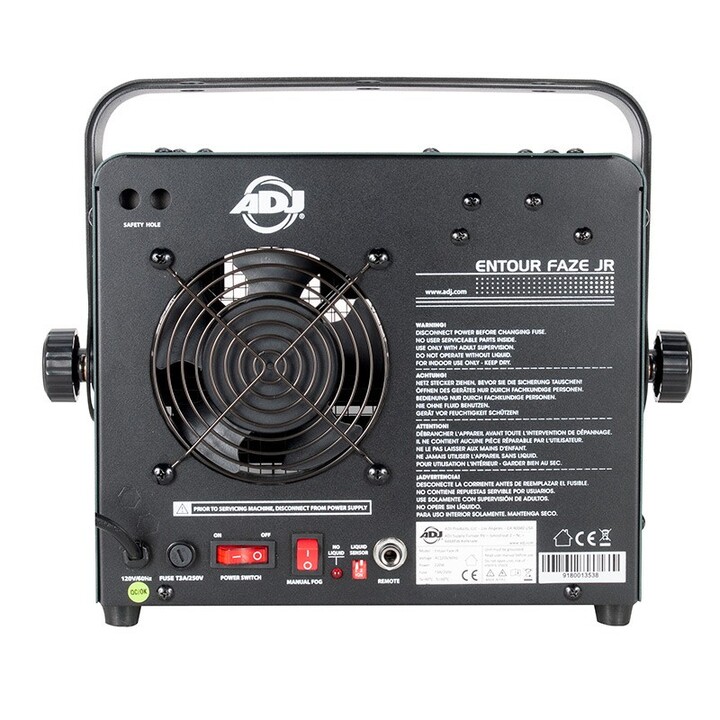 The American DJ Entour Faze Jr is the little cousin to the Entour Faze and hits the perfect balance between being suited for permanent installation and also being portable so is great for both entertainment venues and mobile DJs alike. The Entour Faze Jr can produce an atmosphere-giving haze in just 70 seconds at a rate of 2.2ml per minute giving you plenty of usage from its 3 litre capacity, and with its clever automatic circuit cut off you can feel reassured that this machine is still safe even if you forget to refill the tank.

The Entour Faze Jr is the smallest member of the Entour Atmospherics Series of products from ADJ. This 200W Faze Machine uses ADJs patent pending rapid heater technology that allows the machine to be ready to produce haze in 70 seconds from the time its turned on. This is done by the heater constantly reheating to a optimised temperature.

The Entour Faze Jr can be operated by the faze trigger switch on the rear of the machine, or by the supplied Entour VT-1 wired remote. It has a large 3-litre tank that uses standard water based fog fluid.

The Entour Faze Jr is portable and light in weight, but is rugged for everyday use. It creates a thin mist of atmospheric in the air, without a large plume of smoke, to enhance light beams. Its designed for permanent installs such as small stages or performance spaces, or may be used on the road by mobile entertainers.